Emotions play perhaps the biggest role in determining whether a day trader ultimately succeeds or fails.  Developing a working system is an ability that most traders ultimately develop.  Some people even develop or find excellent trading systems that only need to be followed exactly as the system is intended to be followed, and the trader will make enormous profits.  Unfortunately, most traders do not follow their systems exactly because their emotions get in the way.  This leads to regret, anger, frustration, and ultimately failure.  Trading is hard enough without bringing emotions into it.  If you can learn to master your emotions, you will begin to master trading itself.

The Slimmest Margins Between Success and Failure

What many people may not realize is that the difference between success and failure in day trading is extremely narrow.  Look at this chart showing the net profit a trader of a binary security will make depending upon the percentage of time that their trade is a winning trade. 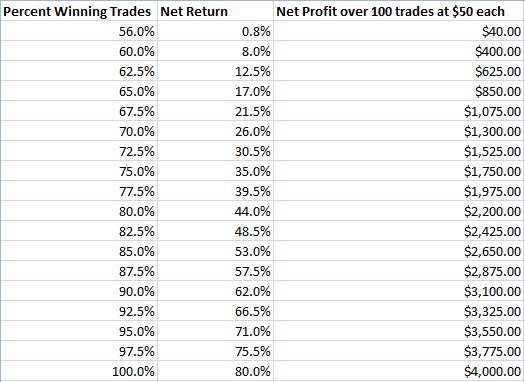 Because the margins between great success and failure are so slim, a trader can not let emotions cost him even a small amount.  Put another way, a trader who masters his emotions has the ability to make a lot of money day trading!

Identify How Emotions “Hurt” Your Trading

The first step to overcoming emotions during trading is to identify the ways in which emotions are harming your trading.  These are the most common ways that emotions hurt a trader, and cost him money, and steps to overcome them:

This is one of the worst things that a trader can do, and unfortunately it is also one of the most common.  Not entering a position when the system calls for it for any reason (burned previously on a similar setup, down on the day, up on the day and protecting gains, not recognizing the opportunity, ect) begets feelings of intense remorse most of the time, especially when the position would have been a big win.  It also messes with the winning percentage of a system.  If you are not taking positions every time your system calls for you to, then you are missing out on more money over time if your system works.  You never want to miss a huge trade because your emotions made you too reluctant to enter into the position.

How To Overcome This

What traders need to realize is that no system works 100% of the time.  Even when you do everything correctly, even if you feel like all signs are pointing to a winning trade, a certain percentage of time it will not work.  Getting “burned” on a previous trade is a common reason that traders do not take a subsequent position.  The problem is that a system is not a system if you do not follow it every time.  If your system works, you need to follow it precisely, if your system doesn’t work, you need to shut your trading down and make adjustments in a demo or “sandbox” arena until you can systematically make money again.

A trader needs a short memory.  Always stay in the moment.  Do not pay attention to your profits/losses for the day, and forget about any prior trades.  Treat each opportunity as an individual entity, as a part of a systematic way to make money.

Taking Too Large A Position After A Win(s)

This is the flip side of being reluctant to enter a position.  Positive emotions can make you enter a position with much more size that your system dictates, because you are “feeling lucky”.  This can lead to big losses, and can lead to reluctance to enter future positions at all, or it can lead you to enter future positions with too small of a size.  Using too large of a position can lead to a loss that is nearly impossible to return from, or at best a loss that will ruin your profitability for a period of time.

How To Overcome This

The solution is similar to being reluctant to enter a trade.  Remember that your system is in place because statistically over time, it works.  If you feel that positive emotions are causing you to enter positions much larger than normal, stop yourself, and realize that you have to stay true to what has been proven to work.

Amateur traders almost always make the mistake of being overly optimistic about a trade that goes “out of the money”.  They think that if they hold their losses long enough, eventually the trade will become a winner.  The problem is that oftentimes, the trader becomes a larger and larger loss.  This leads to feelings of hopelessness and dejection.  If the loss is large enough, it can also ruin your account balance, and make it very difficult to regain a profitable enterprise.

Always have a pre-determined “out point” or “stop loss“.  If the trade reaches a loss of a certain size, cut your position or exit your position all together.  You must stick to this religiously.  If you have the point pre-determined before you enter the trade, it does not leave wiggle room for you to rationalize holding a loss and letting it turn into a bigger loss.  There will be more trade setups in the future, endless opportunity is ahead of you.  Cut your losses quickly and move on to the next one.

Letting Anxiety Take You Out Of Winning Positions Too Quickly

This is another very common mistake of new traders.  They find themselves in a profitable position, but they become very anxious that it will turn around on them.  They exit way to quickly, and take what would have been a big gain and make it a very small gain.

The best way to overcome this is to resist the urge to exit positions completely.  Instead, exit a smaller percentage of your position (maybe 25%) and let the rest run.  This locks in some of the profits and takes away a lot of the anxiety around holding the trade.  Over time, you will train yourself to hold your winning positions longer.  There is nothing wrong with taking profits, but you have to make sure that you are holding your winning positions for a long enough period of time.

Day traders are all people (except the algorithmic traders).  People have good days, bad days, fight with spouses, have health issues, have other victories in life, and can have any number of things happen in their lives outside of trading affect their emotions.  The problem arises when these emotions influence a trader’s ability to follow their system.  If you are not following your system, you probably will fail to systematically be profitable.

If you feel like you have emotions (negative or positive) that could prevent you from following your system you need to identify them, and you need to clear yourself of the emotions.  Some traders actually meditate, some sit quietly for a few minutes, others may take a walk.  Find what works for you, but it is very important to clear yourself of any strong emotions prior to trading.

This is the emotion that no day trader wants to experience, but every trader on their journey to becoming a professional day trader experiences at some point.  If you feel like you can’t make money, you probably are not going to follow your system very well (or do anything very well).

Controlling Your Emotions Leads to Success

Only with a clear mind, and a willingness to jump on opportunities quickly will you succeed as a trader.  Ask any professional trader and they will tell you that the most important way that they grew as a day trader was by learning to control their emotions.  Control in trading correlates strongly with success.

One thought on “Overcoming Emotions As A Day Trader”